The Tablet PC: It Rocks. The future of personal computing is about to be unveiled, and it’s in the form of the Tablet PC. Its size and features make your desktop look practically ancient. Review by Michelle Delio. [Wired News]

Indian state goes online. An e-government scheme in the southern Indian state of Andhra Pradesh could cut down on bureacracy. [BBC News | TECHNOLOGY]

Awesome! Gateway is releasing a 42″ Plasma TV for less than $3000! More here: Gateway plasma TV to squelch price boom. The direct PC seller will come out with its first television in years on Monday, and the real-eye catching feature is the price. [CNET News.com]

Back in September, my Dad won a 2002 BMW 745i at the Dubai Airport Duty Free in a raffle. They give away two to three similar cars a week in order to entice people to transit through Dubai. He’s been buying these raffle tickets since 1989, so over the years he has more than paid for this car! 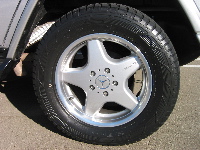 I got new wheels and tires for my G500 a couple of weeks ago. They are AMG Style I wheels from the European G55 AMG. They are 18″ x 8.5″ wheels and are wearing Yokohama AVS S/T 285/55R18 tires. They look really good, do not compromise the off-road capbilities of the vehicle, and provide much better grip and handling on-road. In addition, I had a wireless tire pressure monitoring system installed. It is manufactured by SmartTire and is excellent! It even includes a nice LCD display on my dash that displays the pressure and temp of each tire and has customized alarms for various low pressure situations.

This past weekend (Oct 27th) I had two aborted landings at LHR on a BA 777-200 (flight 106 from DXB to LHR).
We got caught in the gales which affected the region. The first approach was pretty bumpy…the worst I’ve ever been in. About 30ft off the runway we got hit by a 90mph gust that nearly burried the right wing into the ground. 180,000lbs of thrust and a few seconds later and we were back up at 4,000 ft. Several passengers got sick from that roller coaster.
We went around for another attempt but the pilot gave up at about 500 ft and we ended up diverting to Stansted. As some of you know, they ended up closing LHR and canceling about 70 BA flights that day. Cabin crew did an excellent job looking after the passengers and everyone cheered once we were on the ground. Funny thing is that even when parked on the ground, the plane was being shaken quite a bit by the wind. Made it hard to walk around…almost like being in turbulence.
That was the closest I’ve come (that I know of) to an accident in the air. I had a window seat overlooking the wing and I was pretty concerned.

JimmyGrewal.com is finally live! Many thanks to XRackHosting.com for hosting my site and domain. They run their service on Apple XServe servers and offer some great features.
I’m using Radio from UserLand software to publish this site.

An indefinite lockdown is not the ideal circumstan

The Flame & Horsehead Nebulas in the constellation

Entertaining the kids after more than two weeks of