I’m having deja-vu back to the early .Net days when every Microsoft product team tried to hitch themselves on the bandwagon. I’m surprised that Microsoft didn’t release an Optical Trackball.NET.

Today, every consumer-facing and service team in the company seems to be trying to deliver a live.com service. So far, all the ones I’ve seen are very compelling…but in typical fashion they have totally horrendous names which are too long, not easy to remember, and not friendly. Dennis has been working on the recently released beta of Windows Live Toolbar Beta which offers seamless integration between your browser search toolbar and your live.com homepage. Internet Explorer (Windows) users should definitely check out this cool product.

You can learn more about all the Microsoft Live.com service at https://ideas.live.com/. Warning to Mac users, the services work ok in Mozilla-based browsers like Camino and FireFox, but not in Safari (yet?).

Congratulations to Microsoft Office team for finally biting the bullet and building a completely new UI shell for Microsoft Office 2007 (Windows). Unless you worked on Office it’s very difficult to understand just what a major project this must have been and the amount of momentum that was needed to push these changes through both technically and politically.

Jensen Harris has a great blog which has documented the process of designing a new UI for Office on his blog and has posted a screenshot gallery of the recently unveiled final look for this product. I got to know Jensen when I worked at Microsoft as he was one of the people responsible for the Mac Outlook (Exchange) client. With limited resources they managed to create a very successful product which made it possible for Macs to be used on corporate networks where full Exchange support was critical. It was clear then that they were a very dedicated team and extremely focused on doing their best to satisfy their customers.

I’m curious now to see what the MacBU decides to do with Office 12 for Mac OS X. First, they have the burden of moving from CodeWarrior to Xcode which is non-trivial, then they have to handle the PowerPC to x86 transition, and finally they will need to implement the necessary changes to support Mac OS X v10.5 (Leopard). After all of this, they will then need to support the new Office 2007 file formats and consider what UI changes are necessary. My guess is that this effort is at least as difficult as the transition to Mac OS X from the Classic Mac OS, which was a massive engineering effort.

I totally back US President George W. Bush on his threatened veto of any legislation from Congress which tries to unfairly or illegally interfere with DP World’s purchase of P&O.

WASHINGTON (CNN) — President Bush on Tuesday defended a deal that would let a United Arab Emirates-based company run some key U.S. seaports, telling reporters that he would veto any bill to hold up the agreement.

Bush, who has yet to veto a bill during his administration, warned that the United States is sending “mixed signals” by attacking a Middle Eastern company after the ports were run by a British firm for several years.

Lawmakers who have called for the deal to be blocked need to “step up and explain why a Middle Eastern company is held to a different standard,” he said.

DP World is a good company with management and employees from all over the world. I think they will do a decent job of leveraging P&O to deliver improved management of ports which they have recently acquired. Some misinformed US legislators and government officials have objected to the idea that a Middle Eastern company would manage the ports of New York, New Jersey, Philadelphia, Baltimore, New Orleans, and Miami. They have said that this poses a security risk to the US and the deal should be blocked. What a bunch of horse shit.

I hope the clear ethnic/racial/religious bias being shown by these individuals and their uninformed supporters does not go on for much longer. This deal will most likely result in improved performance and security at these ports and the people of those cities should feel good that such an experienced, diverse, and well funded company is now responsible for maintaining and developing this vital infrastructure. If American companies can operate major industries or infrastructure in other countries, then there is no reason why DP World can’t do the same in the US.

I’m certainly not James Bond, but I have now bought my second “Bond” car. My first was a 1999 BMW M Roadster (The BMW Z3 was featured in Golden Eye), and my second is my new Aston: 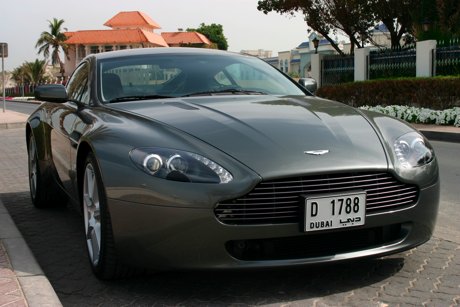 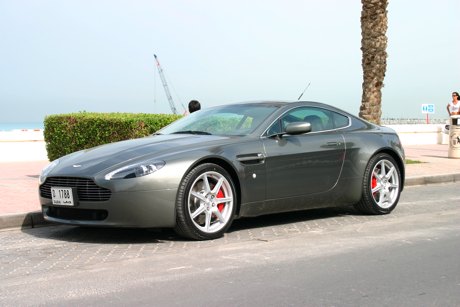 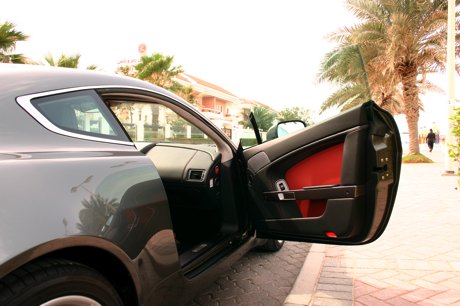 This is my new 2006 Aston Martin V8 Vantage, in Mercury Silver with two-tone Obsidian Black and Chancellor Red leather interior. Here are some pics of it alongside my 2004 Mercedes-Benz G55 AMG which is now for sale: 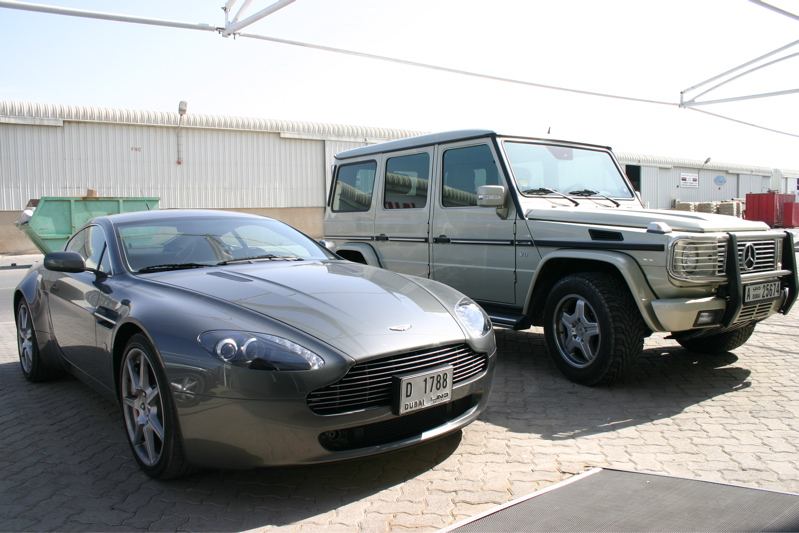 My friend “KC” is Her first post talks about her new iMac Core Duo, aka Donnatella.

Instead of having a nice relaxing day off, I spent my afternoon doing this:

I took these pictures of The Palm Jumeirah and Dubai Marina from the 46th floor of Le Rêve Dubai. The picture quality sucks because they were taken with a camera phone but they are pretty interesting anyway. 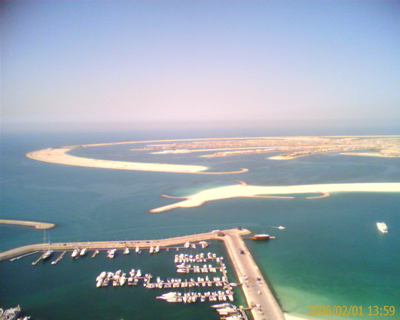 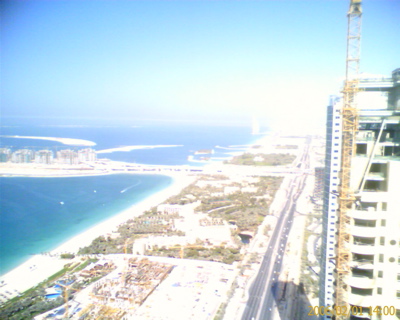 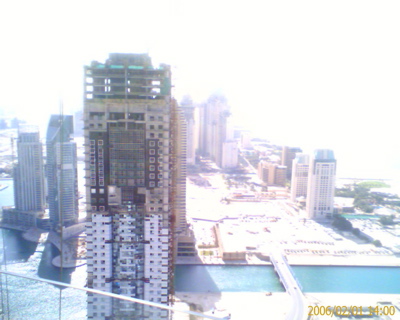 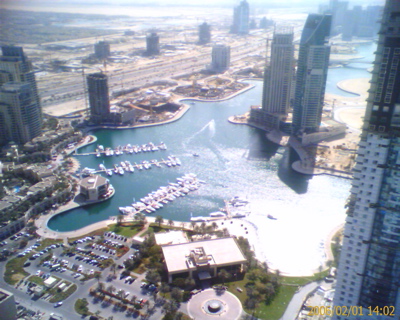 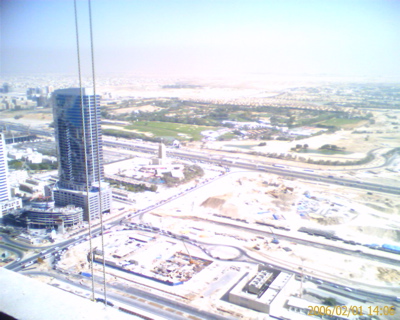 I took my new Sony HDR-HC1 to the Dubai Airshow in November 2005 and filmed several aircraft during the flying display. Earlier I posted a video of an Airbus A380 in flight, but now I’ve stopped being lazy and posted another interesting video which is of an American B1-B Lancer supersonic bomber doing several high speed fly-bys. There were two B1’s at the show, one on static display and the other for the flying display.

The video is being posted in QuickTime 7 format (480p H.264) to save bandwidth, though it was originally filmed and edited in 1080i. Unfortunately, some interlacing is visible in the video and I still haven’t found an easy way to export a movie from iMovie HD to QuickTime H.264 with good de-interlacing.

This is something I’ve wanted to start for twenty years, but I guess better late than never. I’m pleased to announce that a basic website for the Dubai Macintosh Users Group (DubaiMUG) is now up and running, though it’s currently woefully short on content. I’m hoping that this group will give Mac users in Dubai and the region an easy way to help each other and also work together to improve the selection and price of Apple products in the region.

Over the past few months I’ve noticed a big upswing in Mac users based in Dubai and in the region who are accessing my blog so I think the time is right for a MUG to be setup here (I believe there have been several failed attempts in the past) and try and get Apple directly involved and in touch with its customers here in the Middle East. I’ll go through the process of officially registering this new MUG with Apple once it gets a few members and is active.

I’m using Apple’s new .Mac Groups service and hope that it provides the right set of capabilities and ease-of-use to make this effort successful. Please check out the site and post your comments there or here.

My aunt uses Outlook Express and her e-mail account gets tons of SPAM. Can anyone recommend a good WinXP client-side anti-SPAM software that supports Outlook Express? Commercial/freeware/shareware is fine…I just have no idea how to decide what the best options are.

The bright core of our galaxy as seen from Earth.