Dennis linked to this news item on Bungie.net about compatibility between Halo and Xbox 360 and I think it goes a long way to make buyers of the new game console really excited.

First things first: Thank you for supporting Bungie, Halo and Halo 2. You guys rock, and we love you. It’s the anniversary of Halo 2, the game that launched on November 9th, 2004 and forever changed the way we curse.

A year after Halo 2 arrived in stores, and almost four years since the original Halo, it seems only logical that we should make them prettier right? Although that prettiness has a relatively high entry point – the arrival of a new generation of hardware in the shape of the Xbox 360.

A while back, Microsoft announced that the 360 would have some level of backward compatibility. A handy feature for folks with big Xbox collections moving into the future. We worked closely with that team to ensure that Halo and Halo 2 both performed according to plan. That meant a lot of work for our test team.

To clarify, the “new” version of Halo or Halo 2 is simply the disk you have already. Pop it into your 360 and it’ll load up just like before. You will have to log into Xbox Live to enable Halo 2’s online functions, but both games will work immediately.

But here’s another bonus – the hardware in the 360 can do a lot of nifty stuff, and specifically in the cases of Halo and Halo 2, it can display the graphics in wide screen, at 720p, with full scene anti-aliasing. And it doesn’t look kludgy, artifacty or smeary like an upscanning DVD player. The best way to describe it is that both games look like they’re running on a PC at those resolutions. 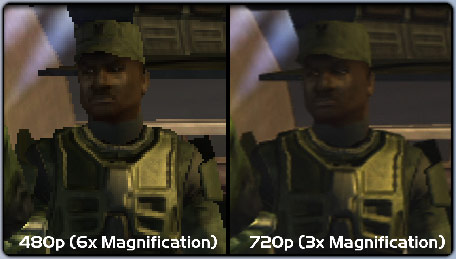 May the Force be with you! Thanks to @nimz911 for

Handheld iPhone photo of the @iss crossing in fron