For as long as I’ve been buying Apple products, they have always been way overpriced in Dubai. My first Apple purchase in Dubai was an Apple IIgs, and since then I have bought all the rest of my Apple computers from the US. I could understand that being true fifteen years ago, but it’s still true today…except for the iPod. Here are some examples:
Mac mini (low end config):
United States: Dhs. 1,825 ($499.00)
United Kingdom: Dhs. 2,200 (£339)
United Arab Emirates: Dhs. 2,800
In the UAE price above, I have removed the 5% import duty to make the comparision fair.
So what is going on? How can there be a 50% premium for selling this product in Dubai when companies like HP and Sony are selling their computers for 0-5% premium compared to US retail prices? Compare this to pricing for iPods. An iPod shuffle can be had for Dhs. 410, which is about a $5 (1%) premium compared to the US…and that’s why you see iPods EVERYWHERE in Dubai…but Macs are rare. Not only are they more expensive than the other PCs on the market, but existing Mac users are confused by the unjustified price differential compared to the US or Europe.
In a trading hub like Dubai, silly premiums like this must stop. If Apple is serious about translating the success of the iPod into increased Mac sales, they need to poke their heads out of Cupertino and realize that they have ignored this market for too long. Apple has no direct presence in the region.
A new company called MacStore LLC is about to open a retail store called an Apple Center at the recently opened Ibn Battuta Shopping Mall in Dubai. There is a picture of the unfinished store below. I believe this store is a joint venture including Arab Business Machines (ABM), Apple’s Independent Marketing Company (IMC) for the region. 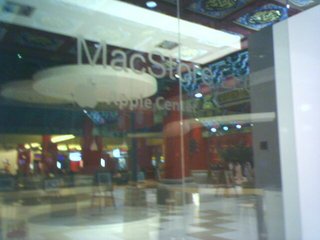 I know ABM very well and they have been involved with Apple for a long time and are really enthusiastic about their products. I owe them a lot for helping me when I was an annoying teenager trying to get my hands on System 7, PowerBook Duo 210, or PowerMac Quadra 900. They have a done a phenomenal job getting the iPod into the retail channel here, and I hope they have as much success with this new store; but without decent pricing Macs will never become popular here. ABM, Apple Europe, and sales team in Cupertino need to fix this situation. I’m fed up of it, and so are many other Mac users who I’ve spoken to. It’s very difficult for me to recommend Macs to my friends when I know the prices are not fair. The problem is probably due to too many middle men being invovled, but why it’s happening is not important to me or other Apple customers.
I hope some of my friends in Cupertino read this rant, and I’m sure to bring it up when I see them later this month. If Apple can get serious about this region, I think they can have a lot of success beyond what the iPod has brought them here. If not, then we Mac users will continue to suffer second class treatment and will eventually give up.