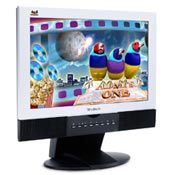 I have been shopping around for an LCD monitor for my home theater for a while. Though my primary display device is a projector, my system is driven by a dedicated PC (often referred to as an HTPC). The problem is that whenever I have to install new software on this machine or debug any problems I might be having, I need to turn on the projector. That’s why I decided I wanted to have an LCD monitor on which I can mirror the signal being sent to my projector.

That means that I needed an LCD monitor which accept a 1280x720p signal over DVI and some sort of DVI splitter. It turns out that there aren’t a lot of smaller LCD monitors (less than 20″) that support this resolution. Viewsonic claims that their professional series of LCD monitors are “HDTV 720p ready” but this is actually misleading. What these displays do is take any resolution fed to them and scale the signal to fill every pixel on the screen. That means if you send in a 16×9 image it will stretch it vertically to fill these 4×3 monitors. There is no way to get a 1:1 mapping or at least maintain the correct aspect ration of the source signal.

In the end I found that Viewsonic has one model of LCD display which can display this resolution: the N1700w LCD TV. This model boasts a 16×9 17″ wide screen LCD with DVI & VGA inputs, along with gobs of TV/Video inputs via a breakout box. As usual, there is a small catch. The native resolution of this monitor is actually 1280×768 which is closer to 16:10 rather than 16:9. When you feed it a 1280×720 signal, it stretches it vertically slightly to fill the display. Luckily, it has a mode which forces 1:1 pixel mapping of the input signal and leaves two 24 pixel black bands at the top and bottom. Again, this monitor is advertised as an HDTV display with a 16:9 aspect ratio which it clearly isn’t. Also, I have no idea why the 1:1 pixel mapping feature is not present in any of Viewsonic’s 4:3 LCD monitors where it makes more sense.

Anyway, I bought this monitor and it will suite my needs. The minor vertical stretching of 720p signals it does is not too bad and this won’t be my primary display device. I’ll post picture of the whole home theater soon once I get my new equipment rack and have everything mounted.