This afternoon I had lunch at the Jebel Ali Free Zone food court and saw a heavily disguised version of the 2006 Mercedes ML500. I’ve seen many pictures on the net of various prototypes of this vehicle, so I recognized it immediately. I had my iMate PocketPC phone with me and took several pictures of the car.

This is not the first prototype I’ve seen in this parking lot. Previously I’ve seen the new Land Rover Discovery (LR3) parked here as well. In other parts of Dubai, I’ve seen other heavily masked vehicles on the highway but have never gotten close enough to figure out exactly what they are. Some of my friends have also seen some and taken pictures as well, but they were always to fuzzy to identify what we were looking at.

I had initially decided not to post the pictures I took today on the net, but now I’m reconsidering. Having worked on non-public/confidential projects when I was at Microsoft, I know that keeping unannounced products private is very important to the marketing efforts of any companies. Many auto manufacturers have been struggling for years to thwart spy photographers who print pictures like the ones I see on AutoSpies.com every week.

Having said that, the guys who illegally parked this car so it was blocking traffic in the parking lot of a very busy food court should have known better. Who the hell do they think they are? Sure it’s hot, but the rest of us drive around and try to find legal spots so why can’t they? This is especially true if you are driving a prototype of something which the public isn’t supposed to see until January.

I have a few more gripes that I need to get off my chest. Why is it that Mercedes customer service in Dubai sucks? Really, I want someone to tell me why I’m treated like shit after spending $$$ on a car? It’s not like you sell the damn thing any cheaper in Dubai than the US. It’s not like the car comes with a longer warranty, in fact it’s only three years instead of four. I don’t get free scheduled maintenance for the entire warranty period. I don’t get a loaner car when my car breaks down and needs warranty service. The employees at my dealer are paid 1/3 of what their counterparts in the US make, and the dealership pays no taxes of any kind. So what’s the story?

It’s great that Dubai has become a popular hot weather testing ground for car manufacturers. But just because we’re in the middle of the desert doesn’t mean that we don’t have camera phones and can’t recognize what your vehicles look like even if you cover them in tape and garbage bags. You could have a disgruntled customer or two walking around eating at the same place you are.

For now, I’m only going to post one picture which really doesn’t reveal much. I feel cheated, so I want to help any other potential ML series buyers out there make a more informed decision by seeing what waiting another year will get them. Maybe they won’t feel as unhappy as I do by the treatment my $$$ has gotten me. I’ll sleep on it and decide if the rest of the pictures I took are worth posting. I feel better after whining like a spoiled brat. Anyone who’s got a strong opinion either way should feel free to post a comment. 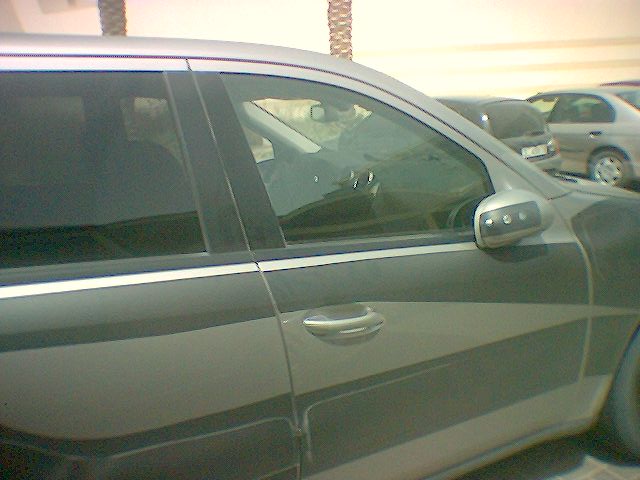