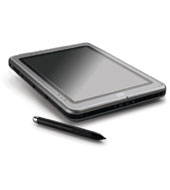 After much thought and consideration, I have replaced my Acer TravelMate C110 convertible tablet pc. This model had the benefits of being a regular laptop which had a rotating screen which allowed it to convert into a Tablet PC. This was my second tablet after the original Toshiba Protege 3500 which I had while I worked at Microsoft. It has now been replaced with an HP Compaq TC1100 Tablet PC

There are several reasons why both the Toshiba and the Acer were not suitable for my needs and the HP is better:

The other Tablet PC models I considered before selecting the HP were the following:

I’ve had the HP TC1100 (Centrino 1.0 GHz, 1024mb RAM, 40gb HD) for nearly ten days and I’m still convinced I made the right decision. I was at first concerned that I bought something that was already nearly ready replacement with a newer model, but the delay of the ultra low voltage version of the Dothan processor from Intel meant that it’s unlikely to see any major improvements in slate Tablet PC’s until early next year. By then I’ll have found an excuse to replace the HP!

I’ve found some great resources for Tablet PC owners over the past few weeks:

Special thanks to the team at @sport.hotel.hermita

I spend a lot of nights looking up, but occasional

I pointed my camera straight up and took this sing

The night sky is alive…just make time to appreci